I'm starting at the beginning, but not actually there.
I'm now 3 months into my indoctrination into Sporting Trials.

Sporting Trials is a form of motorsport in which you drive a spindly little car with road tyres up an impossibly steep off-road course. Several times.

The winner is the one who does it best and most consistently.

As a Novice you won't be a winner.
You may think you'll be OK and pretty handy, but that is before you learn that you may have to forget everything you have learned about driving. Even if you have been rallying, sprinting, hillclimbing, autotesting or whatever.

I wanted to stop sailing as that seemed to be aggravating a weak back which I've suffered from for 20 years or so. Every time I went out in a motor boat, yacht or dinghy I would spend a week or so in pain.
The concept that jostling up a hill in a tiny car would be easier was difficult to convince others of, but as it turns out I've done two trials and not had a twinge from my back.

OK. Yes. I have cracked my sternum falling on the icy ground (not in the car though) and slashed my mud-covered hand, leading to an infection and a course of two different antibiotics. But that was trying to extricate the car from the mud, so wasn't actually in the car.

An early lesson is to stay in the car.

I'm going to explain my route to this strange sport and my choice of car. I will show the work I have done and will do to it and explain my reasoning.
I'm doing this blog because, although the sport has been around since cars drove up hills there is little about it on the internet and whilst the competitors are keen and the events are well subscribed, it seems to be an invisible activity. 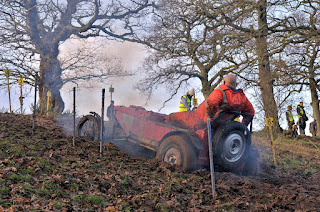 I am just going to put down my thoughts and experiences. They may be wrong. Some may say I am not going about it the right way, but it doesn't matter. It's all fun and I don't want to get too intense about it.
On the other hand it would be nice to progress from being a novice to being a bit better.

Trial Novice
Devastatingly handsome, fit and lithe. Living in the Lake District I absorb the unique atmosphere of the area and exude it in a torrent of bonhomie, good humour and taste. On a bad day I'm a crotchety old git. Some say it's always a bad day.